You are all Goblins, congratulations!

You are also all barreling through space in a ship made of junk and scrap, how lucky! Your goal: to make it to Junktopia, the rogue planet in the middle of space, a utopia for the Goblins, with your ship intact and as much Junk as you can to further its beauty!

Space Goblins! is a HIGH CHAOS AND TRULY OUTRAGEOUS RPG meant for 2-5 players with rotating referee play and an emphasis on wild Goblin-created mayhem!

Use any interlocking plastic building block collection, such as Lego, as your Junk collection, building up and breaking down your Junk Ship as you play with all the other Goblins!

Space Goblins! is a hack of Tunnel Goons for the Goon Jam 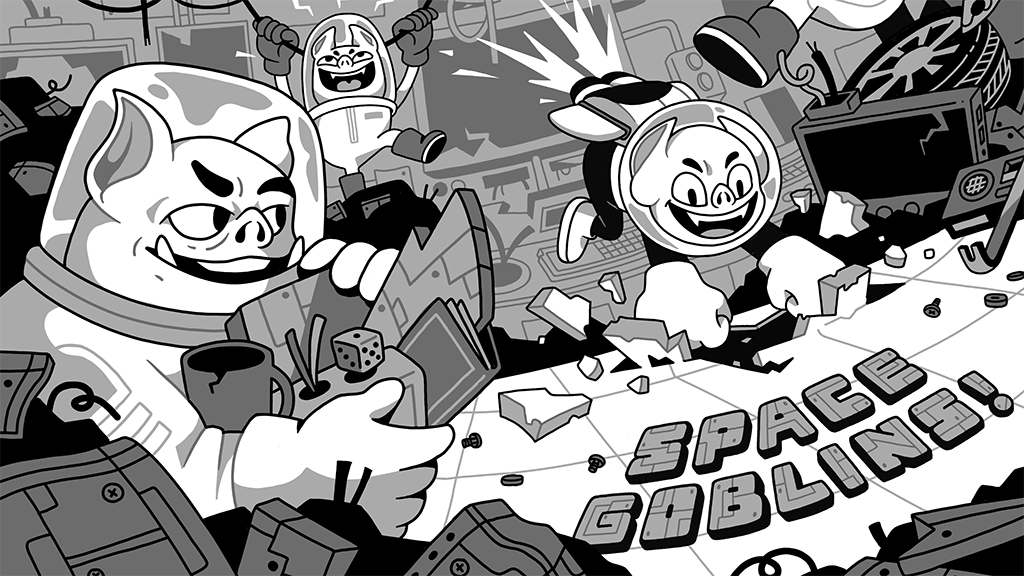 Space Goblins! just finished its run on Kickstarter as a part of Zine Quest! The Kickstarter was to bring an illustrator (Glo Wan), a layout artist (Jamila R. Nedjadi) and an editor (Tyler Crumrine) onto the project to make Space Goblins! as great a product as it can be! Those who helped back the Kickstarter are getting the BEAUTIFUL and GOBLIN version in either PDF or Physical Zine form!

But don't worry, even if you missed the Kickstarter, the new version will be available here as soon as it's complete, and in the mean time you're more than welcome to buy the current, fully playable, version here and get the updated game when it hits!

Proceeds from Space Goblins! post-Kickstarter will continue to help fund the project with security over International Shipping, Additional Zine Printing, and the hard work by all the collaborators!

In order to download this game you must purchase it at or above the minimum price of $12 USD. You will get access to the following files:

Support this game at or above a special price point to receive something exclusive.

Every time someone buys a copy of Space Goblins!, another copy is added here for free. Please grab one from the community if you can't afford it!

Space Goblins is a hectic, fun, spacepunk game about foraging for junk while you hurtle onwards towards utopia.

It's 10 pages with clean, readable layout, and while there aren't any interior illustrations, they seem to be planned for future implementation.

Mechanically, there are *lots* of tokens. Goblin HP is tokens. Spare scrap / ship HP is tokens. You may want a whole bucket of legos for that scrap, and people's quantities of tokens change pretty regularly. If you're someone who likes amassing and spending a small horde of stuff as you play, this is going to be super mechanically engaging for you.

Additionally, there's a very condensed structure to play, and the game moves you back and forth between exploring other people's ships / space objects and recuperating on your own ship pretty regularly. As a GM, you *really* don't have to worry about coming up with compelling hooks in Space Goblins, because the party just crashes into them repeatedly. It's a huge breath of fresh air, and it does a lot to support the fun, chaotic, pulp tone of the game.

And speaking of GMing, the GM role is designed to be flexible, and any person can GM a boarding action. The same person can GM the whole game, or the GM can rotate every time the party disembarks their ship. No one's forced to GM, there's no uncertainty over who's refereeing what, and anyone who's enthusiastic can take the helm for an adventure.

Overall, Space Goblins is a phenomenal pick-up-and-play game. If you like stuff that's short, fun, and pulpy, get this.

-On the game page, the community copies section references "Til The End Of The Night." Is it meant to reference Space Goblins?

Use your shiny click clack rocks to appease the space goblins. Come for the junk, stay for the mayhem. And remember! For the junk, for the horde, for Vicheatya!

Goblins. In. Space. What are you waiting for? Get the game. Now!

This game does some really fun stuff to encourage collaboration and creativity wrapped in a silly, high octane package. This is a perfect game for goblins because it’s ready to ask the hard questions like: which of us forgot to do our chores?

Aw dang, it really is a perfect goblin game isn't it? Thank you so much!

[CHEAT CODE UNLOCK : TURBO MODE] Unlocks the Homing Turbo Boosters for your Junk Ship! Find bigger ships faster and ram into them to get their junk! Start the game with 5d8 for each player when rolling on for the CRASH! Phase instead of 2d8!

This is honestly one of my favourite games I've played in a very long time. It's the perfect kind of silly. <3

Thank you so much!!! This is one of my favorite games I've made in a very long time :)

[CHEAT CODE UNLOCK : BIG HEAD MODE] The Space Goblins and their Junk Ship have GIANT (bulk) HEADS! All Rascal, Rude, Rough, and Tough Traits get a +1

Hey.  Hey you, reading this, you should buy this game.  It's awesome.